In 2012, Maureen Shaffer jumped off a cliff. That’s how she describes going into business for herself after 25 years in the corporate world.

The Ocean Grove resident, who has a degree in biomedical engineering, had been employed in the medical device (medtech) industry. She started out in engineering, but made the move early into marketing – connecting the needs of customers and patients with engineers and products as well as creating awareness of medtech products and their value. 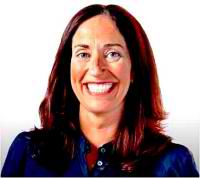 Over the years, she often thought about how it would be to start her own business and offer the knowledge and skills she’d acquired on a consulting basis.  So in 2012, Maureen seized the opportunity to jump off that cliff.

Marketwise, the timing was good. Start-up and growth stage medtechs were grappling with strategy decisions fueled by mobile health and the Affordable Care Act (Obamacare).  They needed guidance on new investor and market expectations, but rarely had the time or personnel to handle in-house.

So in rather short order, Maureen incorporated her business as Mingletoe LLC, invested her own money, and started calling on contacts. (The unusual name came from her niece who, on particularly imaginative day, coined the term "Mingletoe" as a secret password to open a hidden door at the bottom of an old oak tree.  That's essentially what Maureen planned to be doing for her medical device clients: unlocking the hidden opportunities and strategies to fuel revenue growth.)

“It was like when I was learning to ski and enthusiastic friends took me to the top of some very steep runs,” Maureen recalls of her decision to go solo. “Once I pushed off, it was never as difficult as I anticipated when I was standing at the top of the slope looking down,” she recalls.

Over the next 17 months, Mingletoe built its clientele through positive word of mouth and began turning a profit, but Maureen realized she needed some strategy planning of her own.  Although “jumping in” got her venture going, “it’s not a good way to build a business for the longer term,” says Maureen.

She recalled seeing ads in the local paper for UCEDC’s six-week “Entrepreneurship 101” training program in Asbury Park, and last fall she decided to enroll. Participating would force her to spend time looking at challenges and opportunities for her own business. “I thought I knew a lot but I quickly realized I didn’t. It was eye-opening,” she says of the experience.

Following her successful completion of the workshop, Maureen was encouraged by her UCEDC trainers, Jamie Mitchell and Erich Peter, to enter UCEDC’s Quick Pitch Competition, co-sponsored by Capital One Bank.  She knew the competition, which requires entrepreneurs to pitch their business plans in five minutes, would require her to further hone her business strategy – a key to future Mingletoe success.

Maureen was paired with a mentor from Capital One, Belal Ellithy, Vice President of Business Banking, who helped her prepare her pitch for the final judging. With his help she simplified the terminology and concepts in her pitch, and she credits him in particular for creating a succinct mission statement that quickly conveys what Mingletoe offers.

Maureen’s hard work and mentor’s support paid off:  she was named the top winner.  One judge observed: “I was impressed with what Maureen has put together. She has a nice niche…and a firm handle on the target market.  I know that it had to be tough to filter which details to include into a five-minute presentation.”

Maureen received $1,000 from Capital One as the Quick Pick winner, which she’s reinvested in her venture. But the real prize is what she got out of the experience, she says.

Not long after winning the competition, Maureen attended the mHealth Summit in Washington, DC, an information-sharing and networking opportunity for about

5,000 people from 54 countries engaged in mobile health and health information technology. When asked by other attendees what she did, she was ready with her Quick Pitch summary: “I am a business strategy architect for early- and growth-stage medtech companies.” More importantly, it worked.

From the conference, Maureen emailed her UCEDC trainers, who continue to provide advice and encouragement: “One physician entrepreneur I met in the coffee line has already agreed to hire me; a venture capitalist introduced me to one of his CEO’s for subsequent conversation, and I have a meeting with another physician entrepreneur and consultant who has already committed to finding a way to work together.”