In the dazed aftermath of Hurricane Sandy, a dark cloud just seemed to linger for Pastore Music, an instrument and audio equipment retailer and musical lessons studio.  Business at this Union City icon dropped to all-time low all—resulting in cash flow problems along with significant stress and frustration for owner Jerry Pastore and his staff. 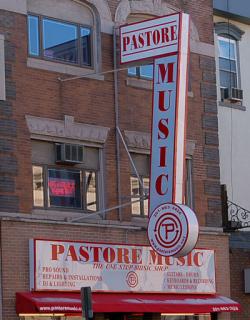 But true to the optimistic proverb about silver linings, that cloud has ended up having one.

The hardships compelled Pastore to evaluate all aspects of their operations and to seek financing that is helping to realize their newly developed strategic plan.  Jerry Pastore and his team aren’t just restoring the business to where it was pre-Sandy, but propelling it ahead. In the process of reinvigorating itself for the future, Pastore is now part of a larger effort by the city where it first opened 75 years ago.

From Gloomy Forecast to Blue Skies

For a week following the storm, Pastore remained closed and transacted no business. Even after reopening, things were slow. The music conservatory, the longest-operating part of the business, was particularly hard hit. Students in unusually high numbers were being forced to drop their instrument or voice instruction due to Sandy-related financial hardship.

Lost revenue eventually totaled $120,000; equally disturbing for everyone at Pastore was the emotional component of seeing engaged and promising students forced to give up their lessons. Most of the teaching staff started their music instruction as young students at Pastore before going onto earn college degrees in music.

With the advice and encouragement of Edgar Gonzalez, a former classical guitar student who’s now an economist specializing in emergency management, Jerry reached out to UCEDC for a $50,000 storm recovery working capital loan. The low-interest funds provided a welcome cash-flow cushion, affording Pastore Music the opportunity to get started on achieving even bigger things.

“Having access to this financing is making it possible to renovate and grow to accommodate increased demand for services as well as develop new lines of business. The UCEDC loan has covered our predevelopment expenses, like architect fees…We already have blueprints!” says Jerry, the third generation of Pastores to head the business.

An Institution in the Community

Pastore Music got its start when Jerry’s grandfather Dominic established it in 1939 in the same building it still occupies on 32nd street near busy Bergenline Avenue. At that time, it offered music instruction and accordion sales.

Over the years, Pastore began selling other instruments (string, brass, keyboards) and audio equipment and lighting, added repair services, and developed a sound division focused on sound systems consulting and installations. Now 55, Jerry started in the stockroom at age 13, was running the business at 18, and purchased it from his father, Robert, when he was 27. 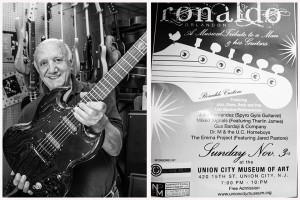 No one’s been there longer than in-house luthier (a creator and repairer of stringed instruments) Ronaldo Orlandoni. A recognized name within the music industry for instrument repair/restoration and for crafting custom guitars played by top musicians (Blue Oyster Cult, The Allman Brothers, and Johnny and Edgar Winters, for example), he joined Pastore as a part-time accordion repairer nearly 50 years ago after emigrating from Italy where he had apprenticed at guitar factories. Maestro Orlandoni became the driving force behind Pastore’s full-service instrument repair shop.

Pastore’s business plans include expanding the instrument construction and repair division, currently on the second floor of their turn-of-the-20th-century building. An electronic recording department is under development to provide equipment and technical assistance to the growing home recording industry. Renovations will be required throughout the decidedly retro building, with the exception of the modern first-floor sales room.

Pastore’s vintage look can seem charming to a visitor, but Jerry points out the impracticality in some places—like the third-floor instruction rooms, which will be getting state-of-the-art soundproofing, among other upgrades. Right now, when you walk along the hallway you can hear music or song emanating from every room, which Jerry says can be distracting for the students and instructors. Furthermore, in this current acoustic situation, drum lessons must be specially scheduled so as not to overlap with and drown out everything else!

While formulating their business plan, the Pastore team discovered a trove of vintage instruments and electronics in various states of repair that had accumulated over the decades—from a 19th-century banjo and upright basses to PAF ’59 Les Paul pickups and a Leslie Combo Pre-Amp II, to name a few. Using some of their funding, they’re undertaking whatever rehabilitation the pieces require and developing a vintage instrument and equipment showroom where clients can try them out and purchase them or negotiate trades. (check out the special website Pastore created to feature these vintage instruments:  www.pastoremusic.com )

The UCEDC loan is making it possible to do things he’s been thinking about for years, Jerry says. A project particularly close to his heart—the need for which was underscored following Sandy—is the establishment of a scholarship program that channels donations from non-profits to enable students to start/continue their musical study (including borrowing/buying instruments) regardless of ability to pay.

Also in his sights is a youth performing arts center to be opened in a converted nearby building: a place where kids—aspiring musicians, singers, DJs, and other performing artists—can jam, perform for friends and family, hold readings, attend workshops and learn from each other.

“There was a culture of performance in this town and it’s important to keep that alive,” Jerry says. “The population curve is very much youth here. There’s a need for afterschool programs and activities, especially in the arts.”

Pastore Music’s plans for its future as a business and for becoming even more involved in the community by promoting opportunities for Union City’s youth are pretty much in lockstep with a strategic vision shared among local elected officials.

From an economic standpoint, that vision involves burnishing the city’s image and re-establishing it as a “destination”—in part by capitalizing on the city’s history as a center for the performing arts and for the talented artists who have lived and currently live there. Union City officials are also taking this into the schools by ensuring that the performing arts remain part of the educational curriculum and that students get plenty of exposure to the arts (in fact, the high school’s 900-seat auditorium with a state-of-the-art sound system also serves as the Union City Performing Arts Center).

For its current and envisioned service to the music industry (professionals and amateurs alike) and its local community, Pastore Music is integral to both endeavors.

Watch a video about Pastore Music's role in creating a hub for music and the arts in Union City: